What do Biden’s solar tariff exemptions mean for the future of American solar?

A federal investigation that delayed hundreds of U.S. solar projects has been tabled until 2024.

Investors looking for the attractive, stable yield offered by private investment into solar projects should feel bullish about the news.

For investors, this declaration shows the federal government signaling continued support for the American solar industry.

Despite the initial uncertainty from the investigation reducing projected U.S. solar capacity by 29% this year, the industry still enjoys strong tailwinds as technology improves, utility rates continue to outpace those of solar, and Congress appears to now support a $550 billion, 10-year extension of a host of clean energy tax credits, originally included in the Build Back Better bill that stalled last year. 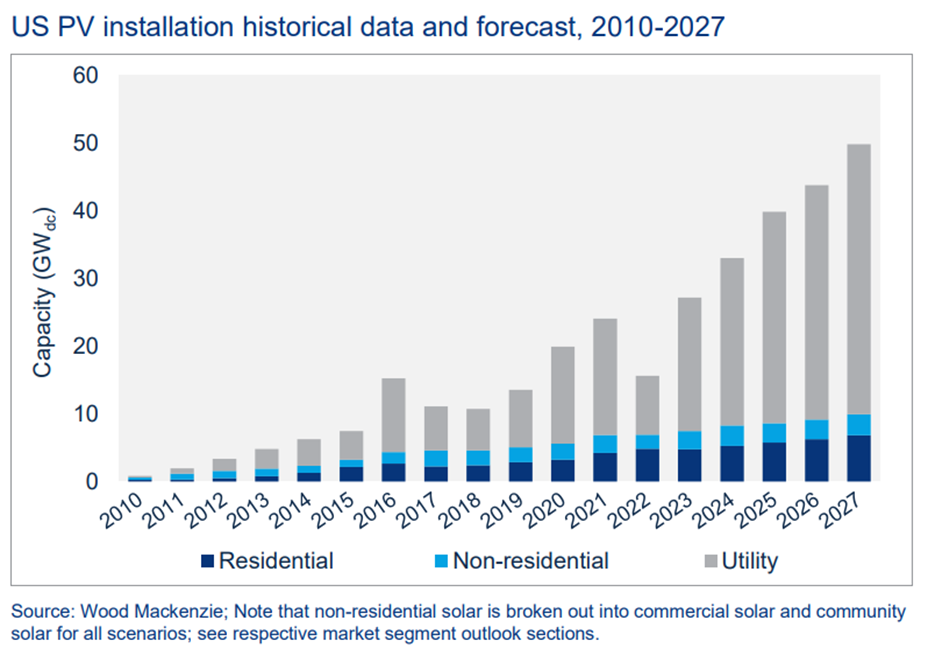 Impact of the tariffs

The tariffs, officially called Section 201 Solar Tariffs, were signed into law by President Trump in January 2018 after U.S.-based solar panel manufacturers petitioned the U.S. International Trade Commission, seeking protection from imported panels they were unable to compete with.

The tariffs would abruptly add a 30% premium to imported solar modules and photovoltaic cells, dropping by 5% per year for 4 years, with the ostensible goal of benefiting American manufacturers. It would mark the first foray in a trade war across multiple industries that has largely been called off – though the impact to solar stakeholders in the United States has been devastating:

The aftermath of the tariffs clearly demonstrates the extent to which a thriving domestic solar industry grew up around inexpensive imported panels.

For every new domestic manufacturing job created, we lost 31 domestic solar installation jobs, blocked over 900 U.S. homes from the lowest-cost option to reduce their electricity bills, and resulted in $9.5 million in losses for investors looking to inject capital into our economy.

The tariffs were costing the nation over $10 million per day in unrealized economic activity and directly ran against hundreds of federal, state and local initiatives that were largely responsible for a rapid sector recovery over the past three years.

Impact of the investigation

Fast forward to February 2022, when the Biden administration announced it would extend the Trump-era tariffs, albeit with some lightened restrictions in some areas. The U.S. solar industry was adjusting to the tariffs, and despite the overall market having its weakest quarter in two years, Q1 2022 was a record-breaking quarter for residential solar installations.

Just one month later, the U.S. Department of Commerce launched an investigation into whether imports from a handful of Southeast Asian nations were circumventing tariffs on Chinese-made solar panels, and once again, the domestic solar industry ground to a halt.

The countries in question – Cambodia, Malaysia, Thailand, and Vietnam – represent(ed) roughly 80% of total imports to the U.S. 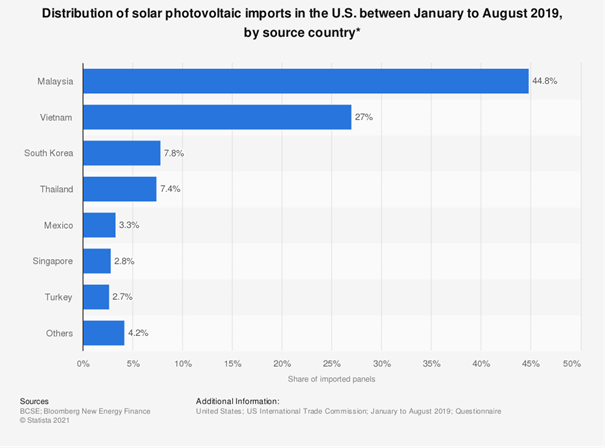 American solar developers, faced with the prospect of holding cash reserves to cover ballooning retroactive tariffs of up to 250% when the Department of Commerce investigation concluded – not to mention consequences for violating the guidelines – immediately slammed on the brakes.

The U.S. commercial solar space, previously projected to grow at 6% in 2022, was revised down to a 14% decline against 2021 installations. Updated forecasts accounting for the tariff exemption have not been released yet.

In a June 6 statement she highlighted the importance of “ensuring America’s families have access to reliable and clean electricity” while continuing to hold trading partners accountable, and the administration appears to be taking this commitment seriously.

Beyond suspending the tariffs, the Biden administration authorized the U.S. Department of Energy to use the Defense Production Act to accelerate domestic production of solar and other adjacent energy-related technologies with the combined goals of lowering energy costs, creating jobs, reducing America’s dependence on oil and gas, and positioning the U.S. to serve an anticipated 400-600% increase in global demand for the named components in the coming decades.

Further, the U.S. Department of Interior declared a 50% reduction in rents and fees for solar and wind projects on federal lands, aiming to help attract more investment into those projects with a goal of permitting 25 GW of renewable energy on federal lands by 2025. Just two weeks later, the administration issued final approval for two solar projects in the California desert that will create up to 1,000 jobs and power 132,000 homes by adding 465 MW of solar capacity to the grid.

Other ongoing initiatives include developing tools to reduce permitting delays for residential solar, efforts to use solar to reduce energy costs in underserved communities, and a host of programs across multiple agencies that provide funding to retrain workers to take advantage of new living-wage jobs in solar.

The result is a projected tripling of domestic solar manufacturing capacity by 2024, largely driven by “private investor confidence” in these various initiatives – and despite public markets suffering their worst first half-year in decades, investors have plenty of reasons to feel bullish on solar.

Investing in solar: “what market correction?”

Perhaps, finally, the U.S. can dispense with the misconception that renewables require paying more, or conceding to below-market returns on investment, in order to “do the right thing.” Solar’s prospects for wealth creation have never looked brighter.

One of the most important factors in keeping solar investment-worthy is the retail price of energy – more specifically, the growing costs of utility power measured against increasingly cost-effective solar power. Utilities have averaged about a 2.8% annual price increase over the past several decades, with a 4.3% increase in 2021 alone. Extreme weather events, geopolitical instability, and climate legislation all suggest this growth rate will persist into the future.

By contrast, the cost of rooftop solar has dropped by more than 60% over the past decade, and despite a slight recent bump attributed to the aforementioned trade instability and pandemic-related supply chain issues, the trend line remains pointed downward. 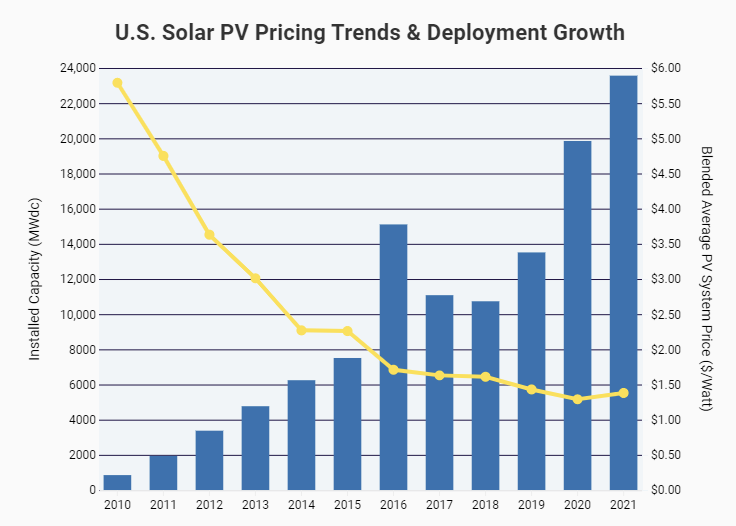 As a result, loans used to deploy solar on residences across the U.S. have proven resilient, with payment delinquencies holding steady below 0.5% through both the COVID-19 pandemic and a recently cooling housing market. It’s pretty easy to understand: why default on your stable solar loan payment if the consequence is returning to volatile utility bills, and paying more overall?

As you’ve probably guessed by now, the increasingly attractive value proposition for both solar lenders and offtakers sees forecasts projecting continued growth in domestic solar installations, regardless of which policy scenario plays out in the future. 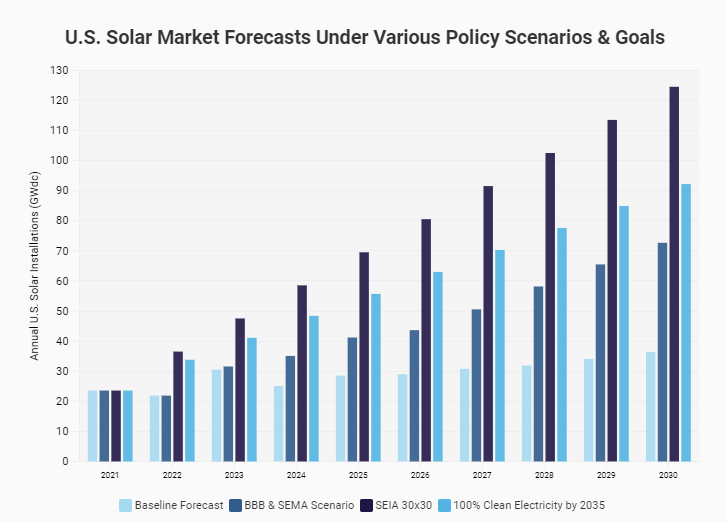 All told, solar presents an attractive opportunity for investors. There’s a compelling value proposition for stakeholders, a track record of strong borrower credit quality, a growing total addressable market, and – for now – tailwinds driven by assertive support from the federal government.

There’s one more crucial development. Investing in the private credit that gets solar projects built used to be flat-out inaccessible for anyone that wasn’t an institutional investor, until recently. Now, thanks to innovations in technology and creative leveraging of the closed-end interval fund structure, it’s possible for anybody to invest in solar credit with just $500, with no need for investor accreditation.

Solar investments are thus supported by strong fundamentals, all the right market trends, a vote of confidence from the federal government, and now, access for anyone – so if you’re understandably disappointed with public market performance in 2022, what are you waiting for?

Editor’s note: this article was researched and written by our fantastic summer intern Nolan Yee, expecting to graduate from Dartmouth College in 2025. We’re lucky to have him.