Making sense of today’s public markets: why it’s not another 2008

Recession fears are dominating headlines, bringing up old trauma for investors who would love to forget the 2008 recession and related housing market meltdown.

The Great Financial Crisis (GFC) fostered a generation skeptical of the benefits of homeownership and apprehensive about investing in housing-related securities. Let’s unpack why mid-year 2022, while a bit disconcerting, is unlikely to be a repeat of 2008.

These days it’s common to hear the market refrain, “this time it’s different,” suggesting that the turmoil of 2008 was a harbinger of a new normal. Sounds scary, but scary news sells ad impressions – the sober take is that the GFC was quite unusual and any current correction should behave similar to recessions of the past.

A recession is defined as two consecutive quarters of negative GDP growth. It’s common to hear prognosticators anticipate a recession “on the horizon,” 12 to 18 months away, but Q1 2022 saw a GDP print of -1.5%. The Federal Reserve is forecasting flat GDP for Q2. The impact of rising interest rates hasn’t even taken hold, and that anticipated recession is very much a reality today.

Economic slowdowns have many causes, but the tend to coincide with the Fed raising interest rates to combat an “overheated economy” expected to become inflationary – or as it is currently, fighting an already infectious rate of inflation.

These periods are often preceded by the Fed maintaining an overly soft monetary policy, which many argue sparks excessive growth in response to artificially low interest rates, forcing the Fed to correct in the opposite direction. 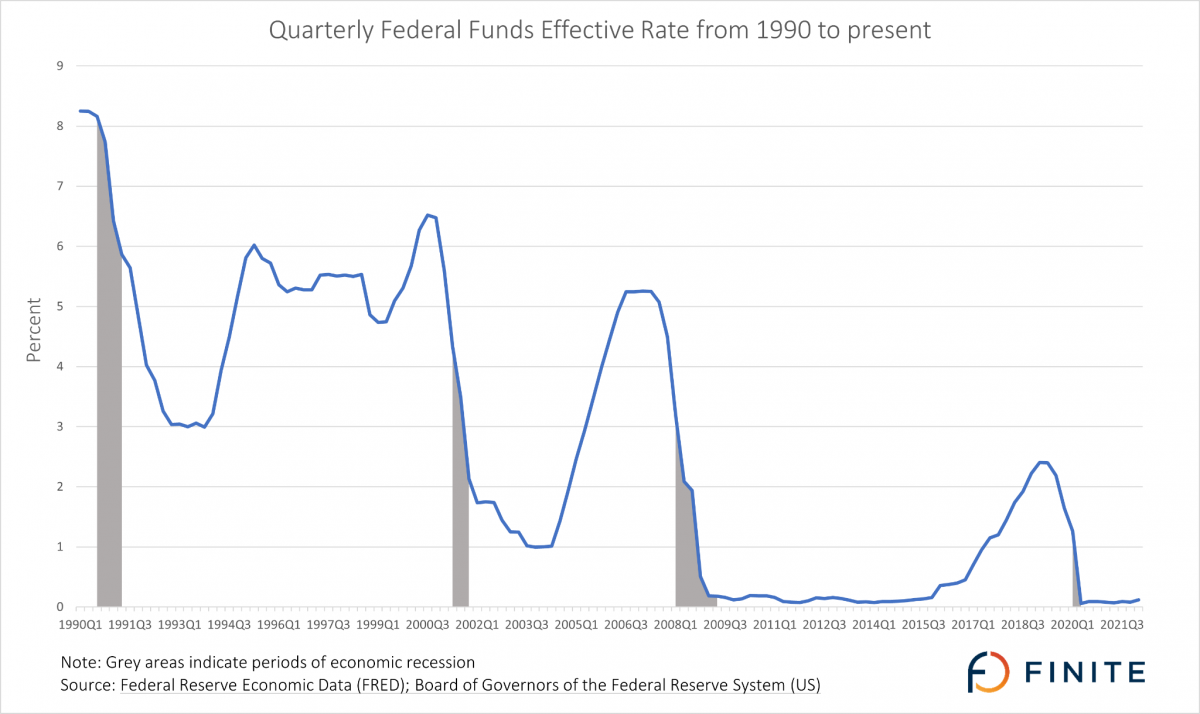 What exactly happened in ’08?

In the mid-2000s, that excessive growth manifested in the housing market (see the entertaining and educational film, The Big Short, or better yet read the book). The excess liquidity created by the Fed, in conjunction with government fiscal and regulatory policies promoting home ownership, led to an oversupplied and overpriced housing market.

Yes, this was a conundrum; basic econ suggests that excess supply should drive down prices.

However, when the Fed keeps interest rates artificially low and money flows freely, short-run disturbances to market equilibrium can occur. Housing is a particularly good sector in which to exploit cheap capital because it can be levered so highly – but like all of those “good things” that come to an end, markets will invariably correct. It was housing where the liquidity flowed, so it was housing from which the money exited. 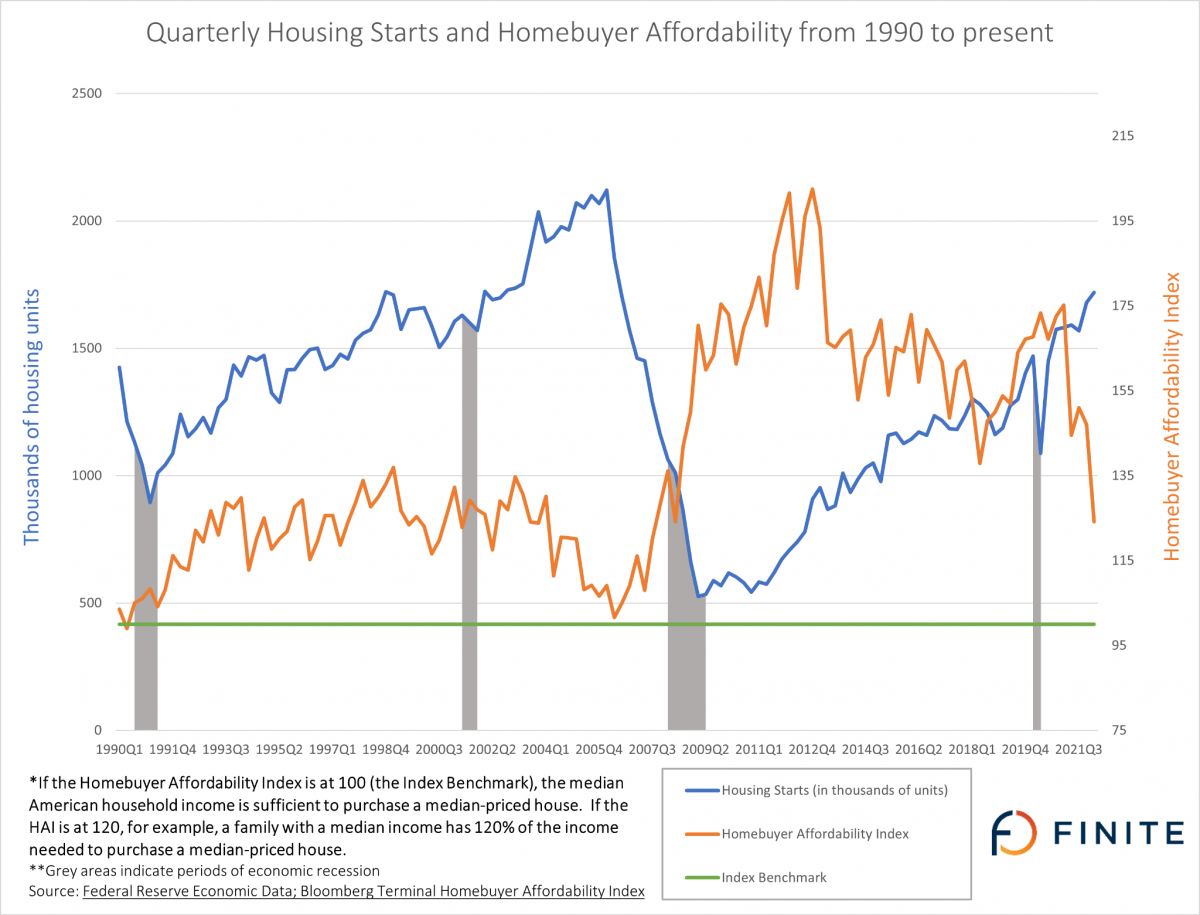 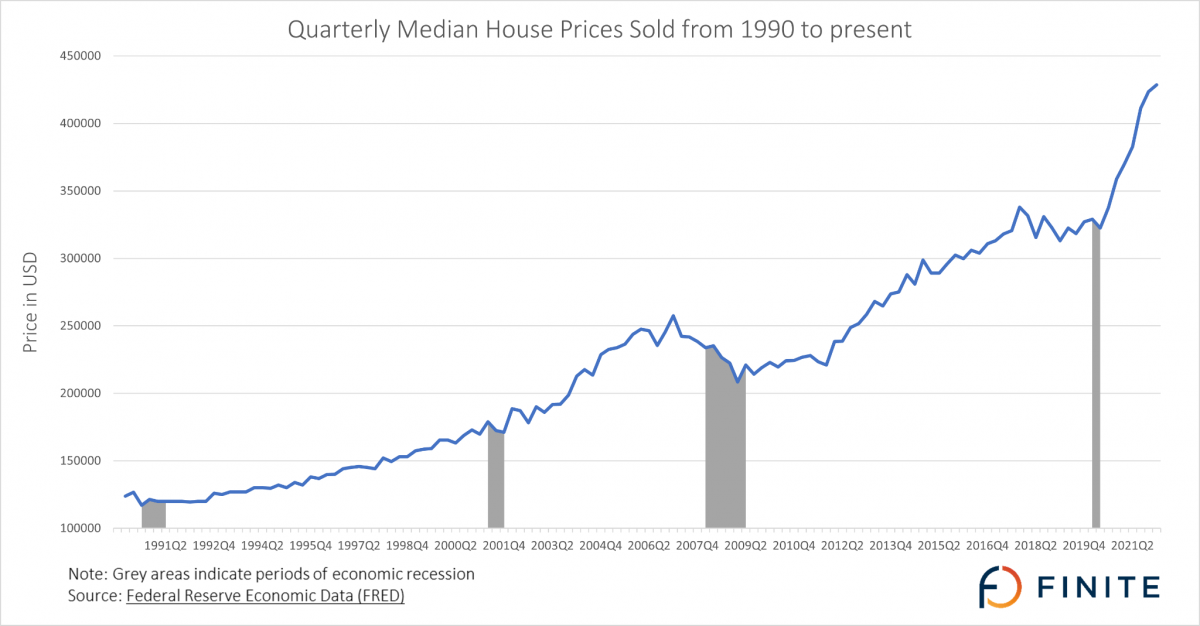 As highlighted in a recent CNBC article, housing during the lead-up to the GFC was also plagued by teaser/adjustable rate mortgages that functioned quite well for home buyers – so long as the interest rates stayed low. Borrowers were exiting that teaser period into a rising rate environment and monthly payments jumped in multiples of earlier period in some cases. Combine mounting job losses due to the recession, rising mortgage payments, and an excess supply of housing, and you have the perfect recipe for widespread defaults. It was inevitable that housing prices would collapse.

Today, just 8% of outstanding mortgages have adjustable rates. That’s the lowest volume on record, and should provide some confidence that on occasion, we do in fact learn from our mistakes.

The ability to borrow against rising home values compounded that crisis. Typically mortgage borrowers pay 20% of a home’s purchase price with cash, and finance the remaining 80%. Back in ’08, however, as home prices continued to rise, homeowners took out home equity loans – in many cases up to 95% of what had suddenly revealed itself to be an inflated home value. When home prices collapsed homeowners went “underwater” (owing more on the loan than the home is worth) and it was easier to justify “throwing the keys back to the bank,” and more socially acceptable, as more people started simply walking away from their homes.

If you were born before roughly 1987 and lived in places ranging from Las Vegas, to Fontana, CA, to Florida’s Gulf Coast, to any of Arizona’s major cities, you clearly remember the abandoned swaths of tracked housing and brown lawns dotted across partially-built communities. The word “blight” still stings for all but the newest generations.

Why it’s probably not a GFC repeat

The current correction will likely behave differently from the GFC of 2008, and more similar to recessions of the past.

The graph below shows defaults on home mortgages barely ticking up in the recession that lasted from March to November 2001. The earlier recession from Q3 ’90 to Q1 ’91 was slightly more pronounced, but nothing like the GFC – ’08 was truly a different beast altogether. 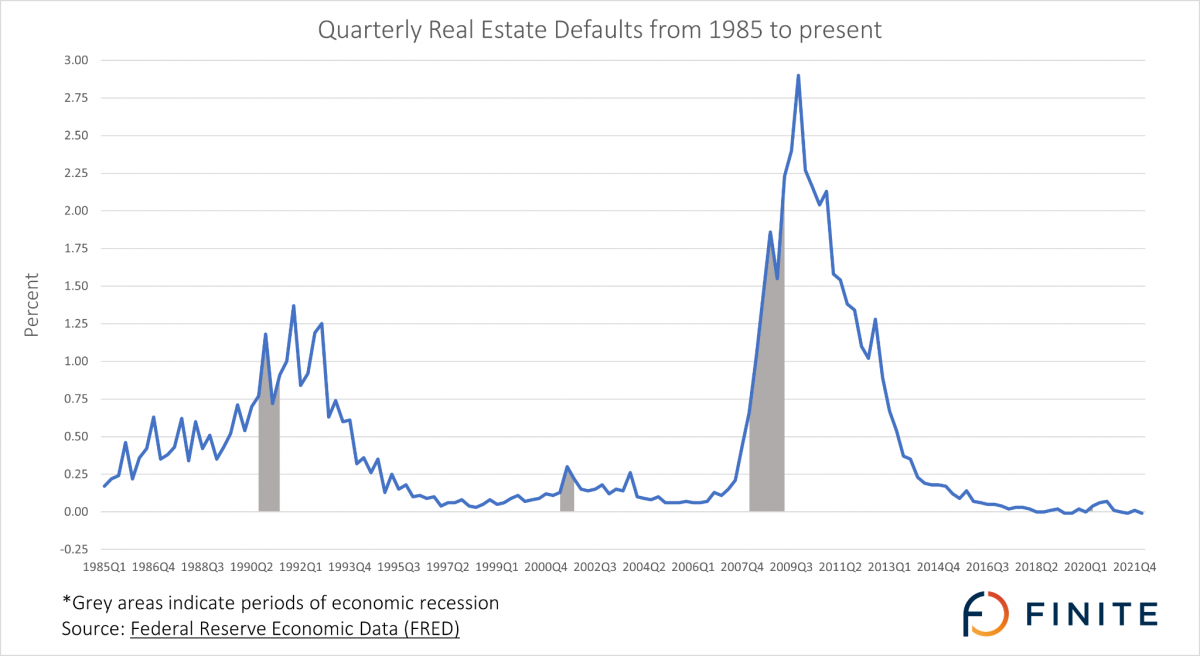 In the current correction, excess liquidity created by the Fed via artificially low interest rates and quantitative easing, as well as $5 trillion in fiscal policy payouts, made their way into the equity markets which are now experiencing a reset. There continues to be, however, a housing shortage estimated at $5 trillion, so while housing may slow as interest rates keep rising, there should be sufficient demand to avoid a large sell-off or create a wave of defaults. Consumer credit and cash savings are also unusually strong, and those factors combined with the low occurrence of adjustable-rate mortgages should add further confidence in the current housing market.

The takeaway message is that this recession will likely behave similar to general recessions in the past, and the housing market won’t re-live the catastrophes it endured during the GFC.

Mortgages and mortgage-backed securities (MBS) should perform in line with other very high quality bonds – and because private solar loan performance is highly correlated with MBS performance, we expect solar credit to continue delivering value to investors as well.

The recession of 2008 was, in fact, the “different one.” It might sound trite, but the old adage “don’t fight the last war” is good advice today.