The Yield Curve: What is it, and why does it matter?

The yield curve is in the news again because the Fed is raising interest rates.

While most people with a mortgage can make sense of changing interest rates, far fewer grasp what the yield curve is, how it behaves, and why it matters. We’ll address each of those three issues below.

1. What is the yield curve?

The yield curve itself isn’t a daunting concept. Plot the interest rates (“yields”) on a series of bonds on a graph, with the maturities on the X-axis and the associated yield on the Y-axis (maturities are the dates bonds are due to be paid back to investors). Connect the dots with a line to create a “curve.” That’s the literal yield curve.

The curve is most generally associated with government bonds but can be used for any class of fixed income securities such as municipal bonds, corporate bonds, and high yield bonds. We’ll use US Treasury securities in this discussion since that is the most common usage. 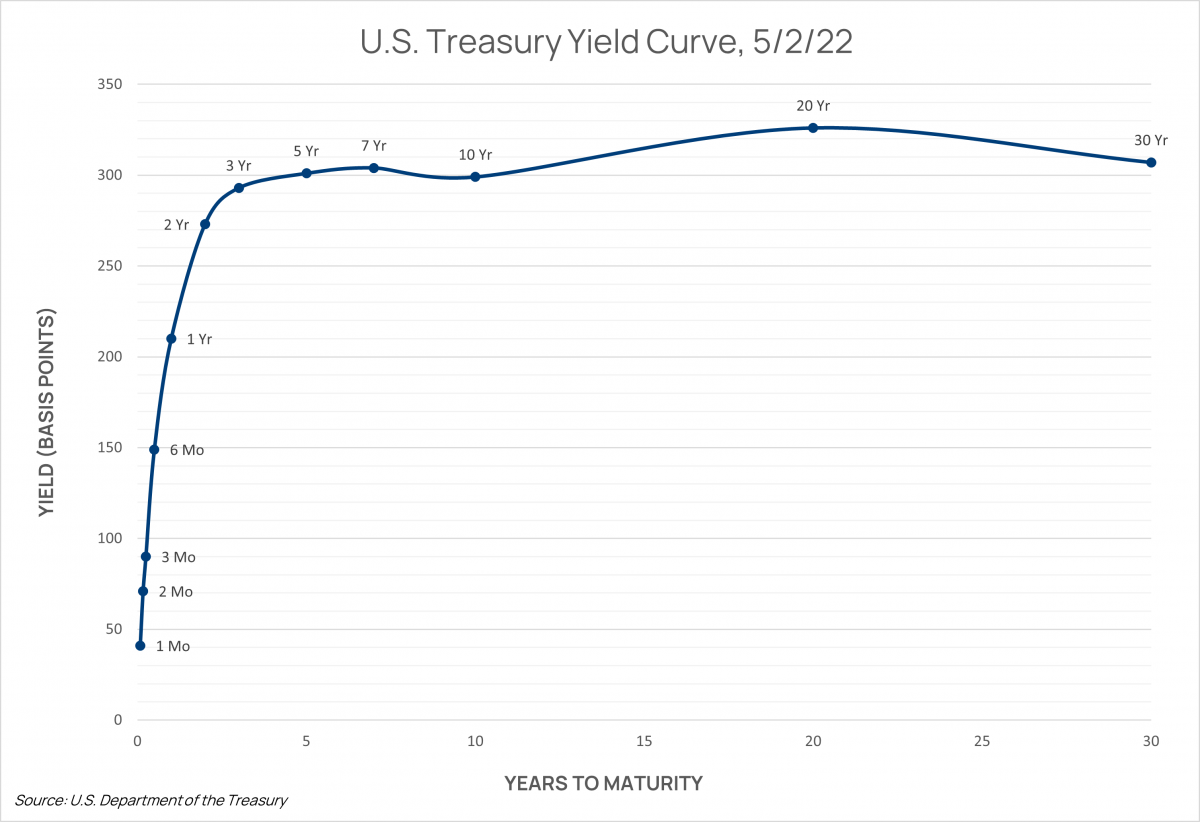 Looking at the graph above you’ll note that the shortest maturity, located closest to where the axes intersect, is the 1 Month Treasury Bill and is shown yielding 41 basis points (bp) or 0.41% as of 5/2/2022. Keep in mind that while the security will only be outstanding one month, the 41 bp represents the annualized yield.

At the other end of the curve is the 30-year treasury which is shown to be yielding 3.07% (again, an annualized return). Plotted in between are the most commonly traded Treasury securities.

2. How does the yield curve behave?

In lay terms, under normal circumstances, you get paid more when you put your money on the line for longer. Let’s take a look at why.

The market sets interest rates based on expectations of inflation and a real return – that is, a return that outpaces inflation – for taking on risk. This idea of the inflation rate plus a “real rate” results in what is called the “nominal rate of interest.”

Put differently, the real rate of interest is the nominal rate less the inflation rate. If someone is referencing interest rates generally, they’re probably talking about the nominal rate, and that’s what you’ll find plotted on the graph above.

The shorter end of the curve, on the left, is heavily influenced by the Federal Reserve and where it sets the Federal Funds Rate (we recently published a deeper dive on the Fed Funds Rate if you want a refresher).

As you move rightward across the curve, the Fed’s influence wanes and market forces begin to dominate. Hence, while core inflation is currently running in the six percent plus range, short maturities are yielding far less while the Fed keeps the Funds Rate low (the Rate is still just 87.5 bp, even with last week’s 50 basis point increase). Longer-maturity bond rates reflect the market’s expectation that inflation will become more constrained over time. Looking at maturities beyond five years indicates the expectation that longer-term inflation will be in the 3.0% range, though this would imply a real return of close to zero, indicating tension between a flight to safety driving rates down, and inflation expectations propping them up (the higher demand for safety generally found in U.S. Treasury securities drives prices up and yields down).

The curve tends to slope upward, with longer-term yields higher than shorter-term yields. In a stable interest rate environment, this is generally caused by the increased risk of longer-maturity bonds. That risk comes in two forms: credit risk and interest rate risk.

For corporations there is a higher probability a given company will be around to pay off bond maturities in one year vs. 30 years. This is how credit risk drives up the premium for longer maturities. For U.S. Treasury securities credit risk isn’t really an issue, but interest rate risk is, as it is for all fixed coupon bonds.

Fixed coupon bond prices react to changes in interest rates in proportion to a term called “duration,” which is a measure of a bond’s sensitivity to changes in interest rates. While maturity defines when a bond’s principal is returned to investors, duration is a measure of the timing of both interest payments and the final maturity. Without getting into the math, it is generally safe to assume that the longer a bond’s maturity, the longer will be its duration.

The 5-year note in the graph above has a duration of 4.61 while the 30-year bond has a duration of 20.34. If interest rates rise 100 basis points, the 5-year Treasury would be expected to fall 4.6% in price while the 30-year would be expected to fall 20.3% in price (the current 30-Year with a coupon of 2.25% had risen in price from par at issuance to $103 as rates fell, and is now priced below $81 after rates jumped this year). This interest rate sensitivity is generally rewarded with higher interest rates to compensate for the risk.

3. Why the yield curve matters

I write “generally” just above because, as can be seen in the first graph, there is limited additional compensation for increasing maturities past 5 years (save for a few bps on the 20 Year). This is referred to as a “flat yield curve,” and results when people are uncertain about the direction of the economy and future inflation. 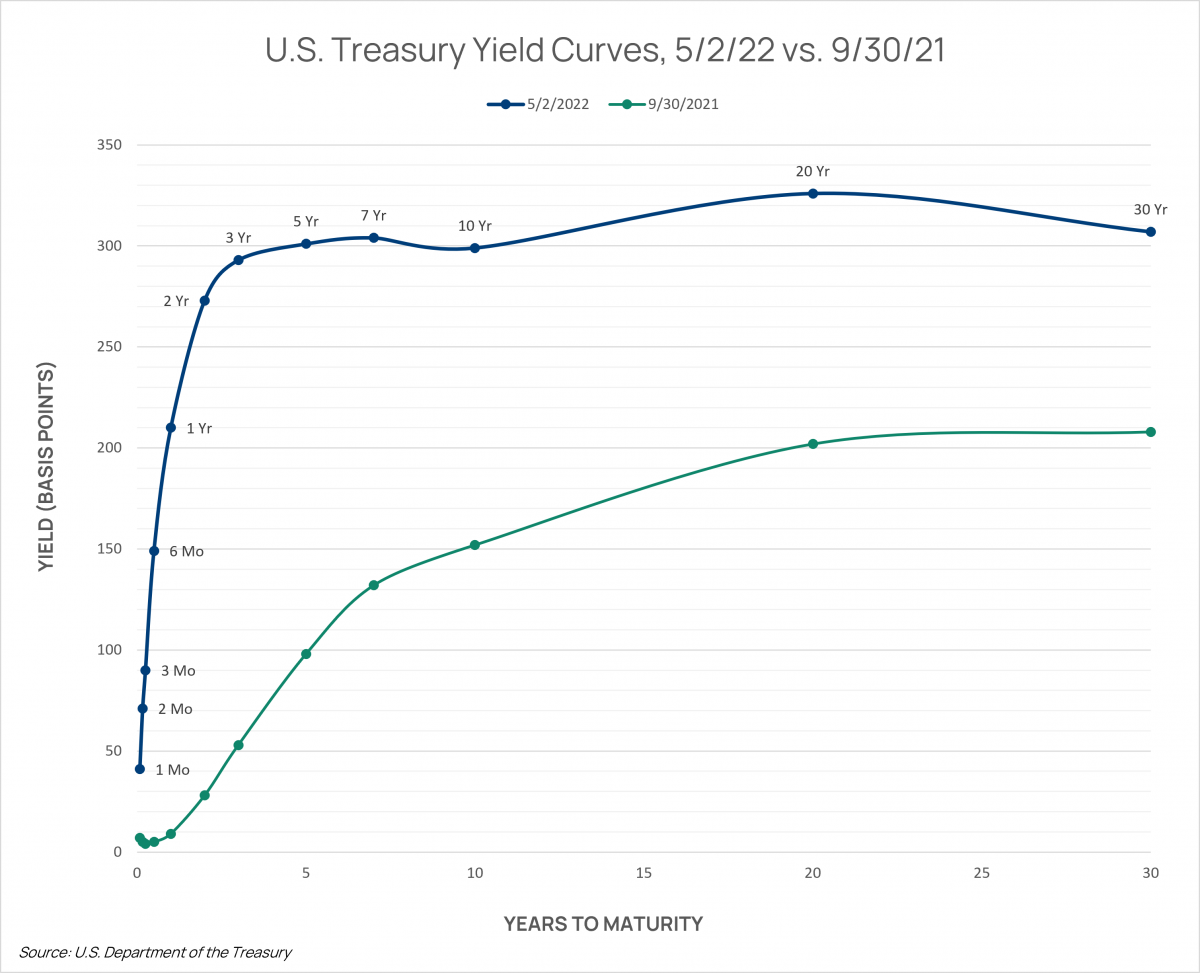 On September 30th last year, we were being told inflation would be transitory, and the curve had a normal slope to it. Then inflation expectations surged, and two things have happened. First, overall interest rates rose at a pace we haven’t seen in decades. Second, intermediate-term rates rose much more than shorter- and longer-term rates.

Shorter-term rates are anchored to the Fed Funds Rate, as we’ve described, so they rose in concert with how the Fed has been setting rate expectations. But longer-term rates didn’t rise nearly as much as intermediate-term rates, prompting the question “why?” Remember that interest rates are primarily a function of expected inflation; the market is recognizing the current spate of higher inflation in the short term, but signaling expectations of more moderate inflation over longer timeframes.

This takes us to how the Fed wrangles inflation out of the market, which is reflected in the shorter end of the current yield curve. Notice how steep the curve is from the 1 Month to the 2 Year maturities. This is due to expectations – based on the Fed’s explicit messaging – about their intention to raise the Funds Rate until it eclipses the expected long-term inflation rate, currently thought to land in the 3% range. The short end of the curve is tethered to the Fed’s actions and intentions, while the long end reflects expectations that the Fed will successfully tame inflation back to its longer-term target of 2%.

The trade-off between inflationary expectations and Fed actions is better observed in the rare moments when shorter-term rates are higher than longer-term rates, and the curve inverts. 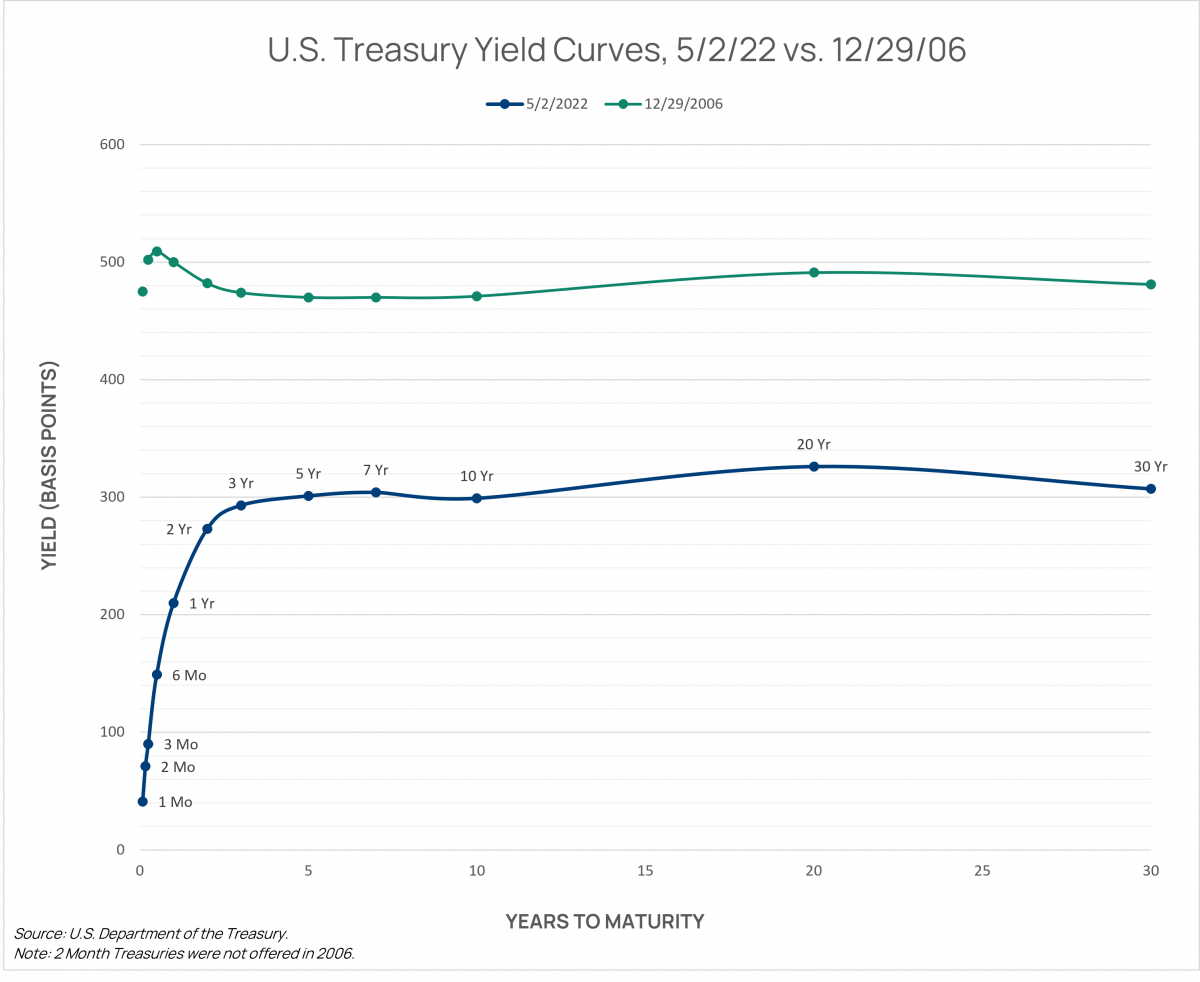 Yes – rates were dramatically higher than they are today. Note how the curve slopes slightly downward; this resulted from higher inflation, the Fed’s determination to subdue it, and the market’s faith that they would succeed. The higher short-term rates reflect the Fed’s decisive actions around the Fed Funds Rate, and the lower longer-term rates reflect the market’s expectation that inflation would indeed subside.

We all know what happened over the following several months. The inverted yield curve often precedes a recession because higher short-term rates deter investment and slow down the economy. It’s not a rule, but now you know why inverted yield curves make the headlines.

Understanding the yield curve involves many variables, but it’s worth the effort. The yield curve tells an important story about the current economic environment as well as market expectations for the future and can help you stay better prepared.