There is a natural tendency in life when difficulties arise to just “do something,” even when you’re uncertain as to what to do. For myself, this habit manifests especially when driving — I generally take routes on the road where traffic is at least moving as opposed to sitting on the freeway in stop-and-go fashion, alternating my foot maddeningly between the brake and acceleration, even if that stop-and-go path saves minutes. The seeming futility of being in a 70 MPH zone and moving at an average of 10 MPH is just too much for me to bear. It may not make much sense in the long haul, but at least I know I’m moving — I’m “doing something.”

For many people, this same tendency is revealed while investing during times of market turmoil and volatility. Financial conversations for the few years leading up to 2022 seemed to be dominated by upmanship and bragging rights over who owned the superior assets. “I’m in XYZ! How much do you have?” where XYZ was a meme stock, crypto, or FAANG. It wasn’t only a sign of being on the inside, but an opportunity to stick it to the man (even as many of the protagonists were themselves “the man”).

But nowadays, conversations start with questions far more timid and reserved. “What are you investing in?” or “Do you think it’s time to get back in?” or “Are you buying the dips?” are far more common, sincere efforts to understand what actions to take in a very uncertain world. While there is a general urge to be people of action instead of stagnant stop-and-go drivers, sometimes being cautious is more than appropriate, particularly when the path forward is so unclear. What was once just basic risk has now morphed into frightening uncertainty with a seemingly infinite number of possible outcomes for the market.

As noted in our Q1 review, we launched SOLRX in this world not just because of higher risk, but higher and rising uncertainty. We are talking about an environment with inflation the Federal Reserve just acknowledged was not transitory, where they are about to embark on raising interest rates in an historically aggressive fashion, and where supply chain woes have dominated headlines and consumers’ purchasing power, not to mention Russia’s “special military action” and other ongoing international issues. A seemingly more uncertain world. 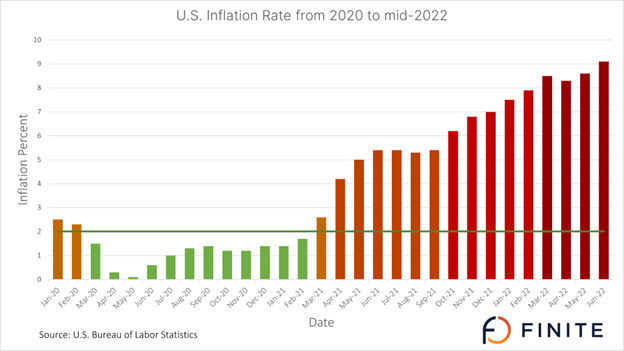 With this environment as a backdrop, we proceeded cautiously, investing in short-term, high-quality assets. We founded Finite to be investors, custodians of your dollars — not traders — and this philosophy paid off well in Q1 when both the fixed income and equity markets traded off dramatically. When we embarked on Q2, we remained just as skeptical about the market’s ability to weather higher inflation, higher interest rates, and higher uncertainty over corporate earnings, meaning we stayed cautious. As the quarter progressed and yields rose, we began to judiciously put some money to work, staying focused on maintaining a shorter duration and overall high-quality portfolio. And as in Q1, this prudence paid off in Q2: 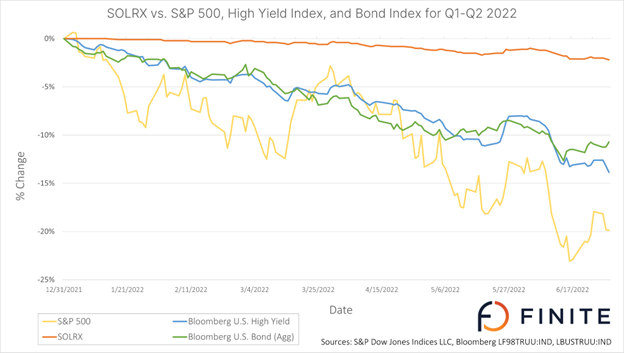 Our capital deployment continues to be conservative as the U.S. economy, if not already in a technical recession (defined as two consecutive quarters of negative GDP growth), may be in a traditional recession before year-end. The perceived strength in the labor market based on a low unemployment rate has buoyed hope that the U.S. may be able to skirt a serious slowdown. This faith, however, is being challenged by a continued falling labor force participation rate as working age persons leave the labor force and therefore no longer count as unemployed. Indeed, there were 711,000 fewer people employed in June 2022 than in February 2020 despite headlines of recent job gains. More recently, the layoff announcements that have increasingly been scrolling across the business pages have added to the market’s anxiety and the expectation of a higher unemployment rate. Questions still remain as to the Fed’s willingness to battle inflation in the face of a slowing economy particularly as we head into elections this fall, but they seem steadfast (for the moment at least) to continue raising short-term rates.

As Finite embarks on Q3, we remain overweight on treasuries and short-term cash equivalents and underweight on private assets. Private asset pricing tends to lag the public markets, meaning we are just now seeing opportunities in which rates and spreads are beginning to generate return expectations commensurate with the associated risk, so expect to begin deploying capital soon. Expected returns on commercial deals are moving from the mid- to high-single digit range to the high-single/low-double digit area while risks remain the same. Residential solar expected returns are moving more up a bit more slowly but should reach our hurdle rate in the next few months as well. As such, the gross portfolio yield is now approaching 3% and we expect to reach our goal of 6% to 8% net yield by the end of Q3 as we deploy these opportunities.

[2] The Bloomberg US Corporate High Yield Bond Index measures the USD-denominated, high yield, fixed-rate corporate bond market. Securities are classified as high yield if the middle rating of Moody’s, Fitch and S&P is Ba1/BB+/BB+ or below.

[3] The S&P 500 Index, or Standard & Poor’s 500 Index, is a market-capitalization-weighted index of 500 leading publicly traded companies in the U.S.