Marathon Man is a classic ’70’s movie (from a book of the same title) starring a young Dustin Hoffman as the brother of a CIA agent who is tracking a former WW II Nazi war criminal and his efforts to retrieve a horde of diamonds brutally taken from concentration camp victims but now kept in a safety deposit box in a NY bank. The bad guy, played by Laurence Olivier, kills the brother but doesn’t know if he had told Hoffman of his plans and needs to know if it is safe to go to the bank and retrieve the diamonds. The bad guy is also a former dentist who puts Dustin Hoffman in a dental chair and tortures him. As he pokes around molars and cavities he repeatedly asks “Is it safe? Is it safe?”

That’s the question investors have been asking since the first quarter; “is it safe’ to be in the market, be out of the market or to get back into the market?” Buying the dip may have paid off while the Fed injected trillions of dollars (somewhere in the neighborhood of $5.7 trillion) and the market had an upward drift, but it hasn’t paid off as the stimulus has waned and the economy is left with accelerating prices and decelerating activity. Economic pundits often use the phrase about the Fed ‘taking away the punch bowl’; the second and third quarters have been the morning after.

In previous slowdowns bonds have generally been an asset class to preserve capital. Not so much this time. While the S&P 500 is down 23.9% for the year through September 30, bonds, as measured by the Barclay’s Aggregate have lost 14.6%, better but certainly not safe.

As we’ve discussed throughout the year our concerns have included both the risk of the economy slowing and inflation accelerating. Phillips Curve advocates have a difficult time holding these two thoughts in their heads simultaneously, the next generation of Wall Street could have benefited from That 70’s Show covering more than just fun times with Ashton Kusher. Unfortunately, some of our team are old enough to have lived through the Nixon, Ford, and Carter years and are painfully aware that inflation and a recession can co-exist.

It didn’t take PTSD to be cautious, but just paying attention to smart people such as Mohammad El- Elian, Larry Summers, Ray Dalio, … all of whom warned loudly and repeatedly the Fed was behind the curve and as such would need to be overly aggressive to slow inflation and risk an economic hard landing. This led us to be quite conservative in structuring SOLRX, keeping ~28% in cash, ~51% in Treasury Bills, and just ~21% in corporate securities. This has kept our duration short, buffering against rising rates, while limiting credit exposure as stocks have sold off and corporate credit spreads have widened. While even that limited exposure resulted in a 2.6% decline for the nine months through September, it far outpaced the performance of the markets and most comparable funds and asset classes (see the rather colorful chart below).

The question continues; is it safe? We’re not ready to declare “yes” but we are more comfortable that yields on credit now compensate for the underlying risk (in mid-Q1 yields on solar company bonds that were in the 4.0% range now yield in excess of 7.0% (see image below for reference and remember bond prices and yields are inversely related; to put in dollar terms, a bond yielding 4.0% in a 4.0% rate environment would be priced at par ($100) while that same bond now yielding 7.0% would cost $78.20, a 21.8% percent loss). While we remain cautious. The public and private markets are presenting deals that are enticing and we expect to have the portfolio more fully deployed heading into year end. We expect to begin deploying capital into both public and private assets that are yielding over 7% by year-end (as we write this in early October both stocks and bonds have continued to sell off and we’ve continued to wait for our entry point).

It was not, in Marathon Man, safe for Laurence Olivier to go out in public as he had feared. You have entrusted us with your capital and we remain vigilant that it’s dangerous out there. 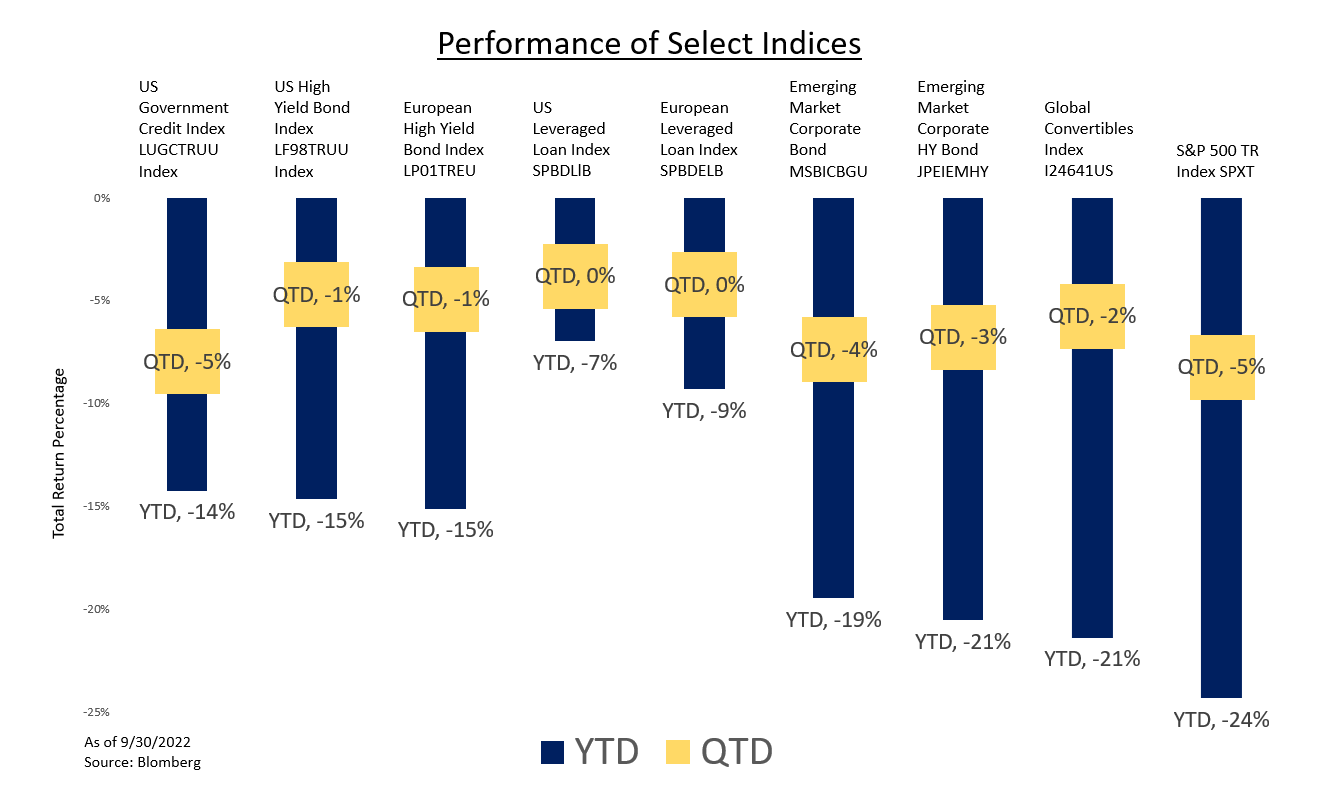 The Bloomberg Pan-European High Yield Index LP01TREU measures the market of non-investment grade, fixed-rate corporate bonds denominated in the following currencies: euro, pounds sterling, Danish krone, Norwegian krone, Swedish krona, and Swiss franc. Inclusion is based on the currency of issue, and not the domicile of the issuer. The index excludes emerging market debt. It was created in 1999 and is part of the Global High Yield Index.

S&P Leveraged Loan Indexes (S&P LL indexes) are capitalization-weighted syndicated loan indexes based upon market weightings, spreads and interest payments. The S&P/LSTA Leveraged Loan Index (LLI) covers the U.S. market back to 1997 and currently calculates on a daily basis. The S&P/LSTA Leveraged Loan 100 Index (LL100) dates back to 2002 and is a daily tradable index for the U.S. market that seeks to mirror the market-weighted performance of the largest institutional leveraged loans, as determined by criteria.

S&P European Leveraged Loan Index (SPBDEL) A market-value-weighted index designed to measure the performance of the European institutional leveraged loan market. On a real-time basis, the ELLI tracks the current outstanding balance and spread over EURIBOR for fully funded term loans. The facilities included in the ELLI represent a broad cross section of leveraged loans syndicated in Europe.

The Emerging Market Corporate Bond is a benchmark index for measuring the total return performance of corporate bonds issued by emerging market countries that meet specific liquidity and structural requirements.

Global Convertibles Index I24641US Convertible Index is a Total Return Index designed to provide a broad measure of the performance of the investable, global convertible bond market. Qualifying fixed income securities may be rated investment grade or non–investment grade by a Recognized Rating Agency or unrated, may be issued with fixed or floating rates and must meet minimum size requirements in their local currency.