We launched SOLRX on 12/31/21 with the clear expectation that we would be in a rising interest rate environment, leading us to deploy capital judiciously; we did not, however, anticipate we would be in the worst three-month bond market sell-off in more than 40 years. Our conservatism has paid off better than we anticipated.

In just three months, the one-year Treasury rose from 0.56% to 1.63% while the 10-year leapt from 1.51% to 2.38%. The yield curve flattened violently, with the 2-10 spread finishing at zero after having inverted. While the Q1 increases were dramatic, we expect rates will remain volatile while continuing to drift higher. 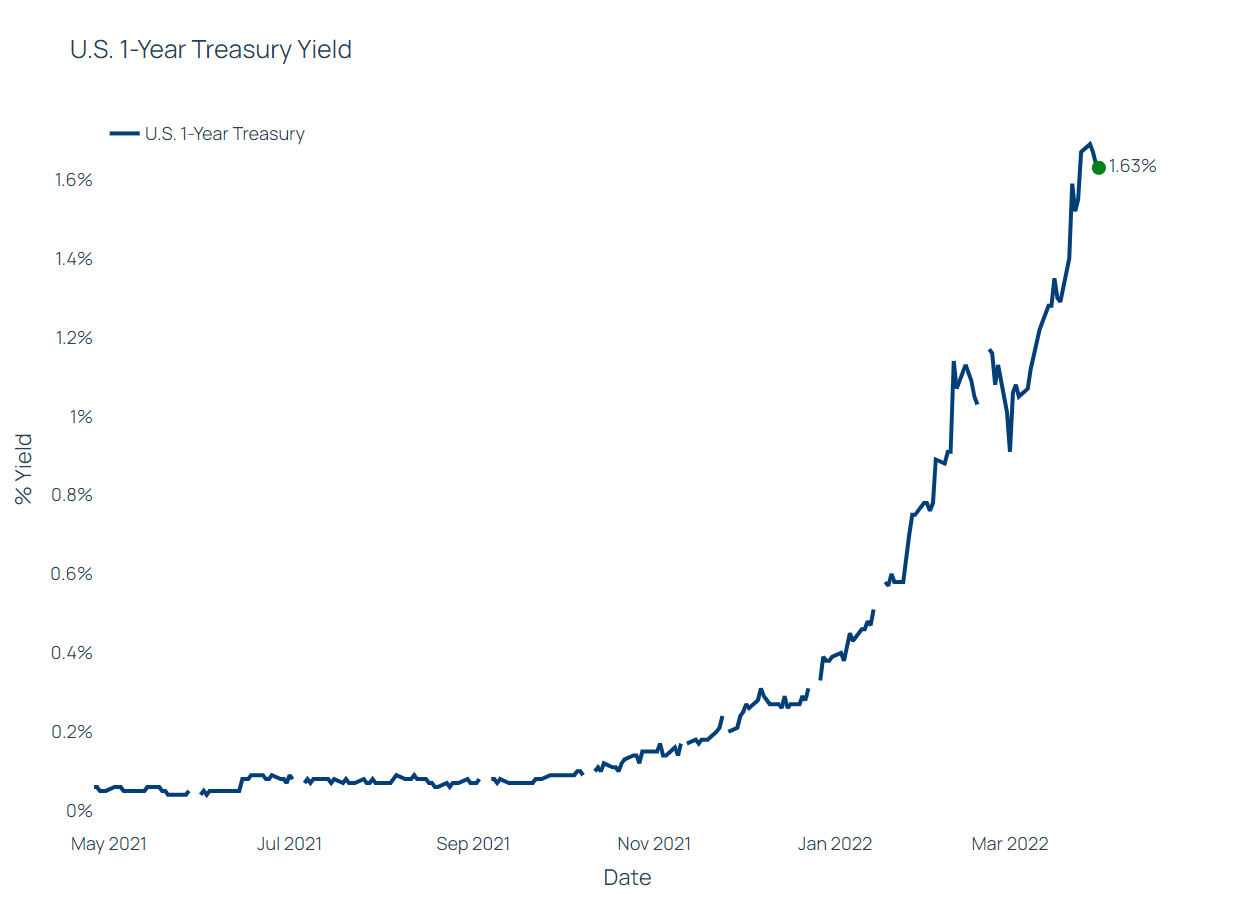 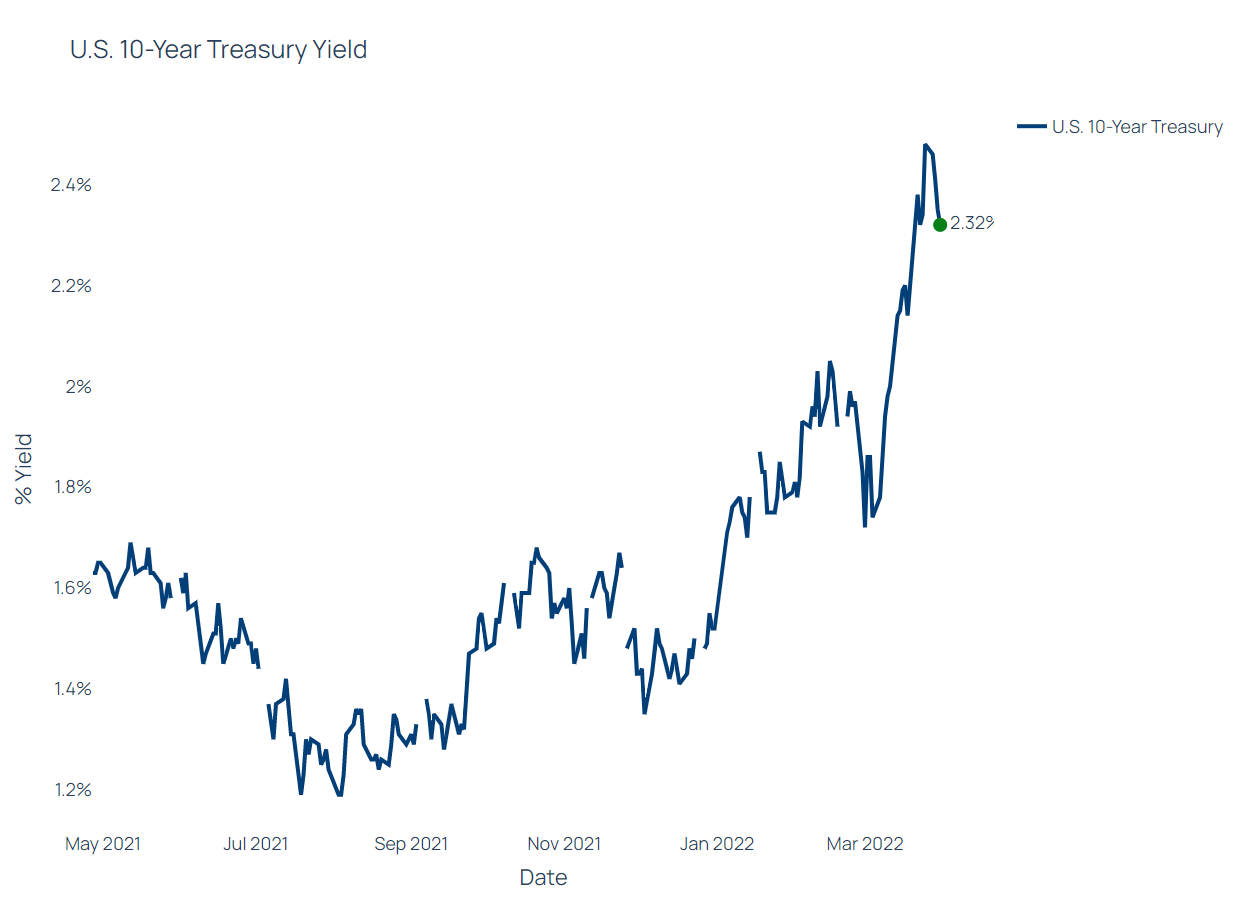 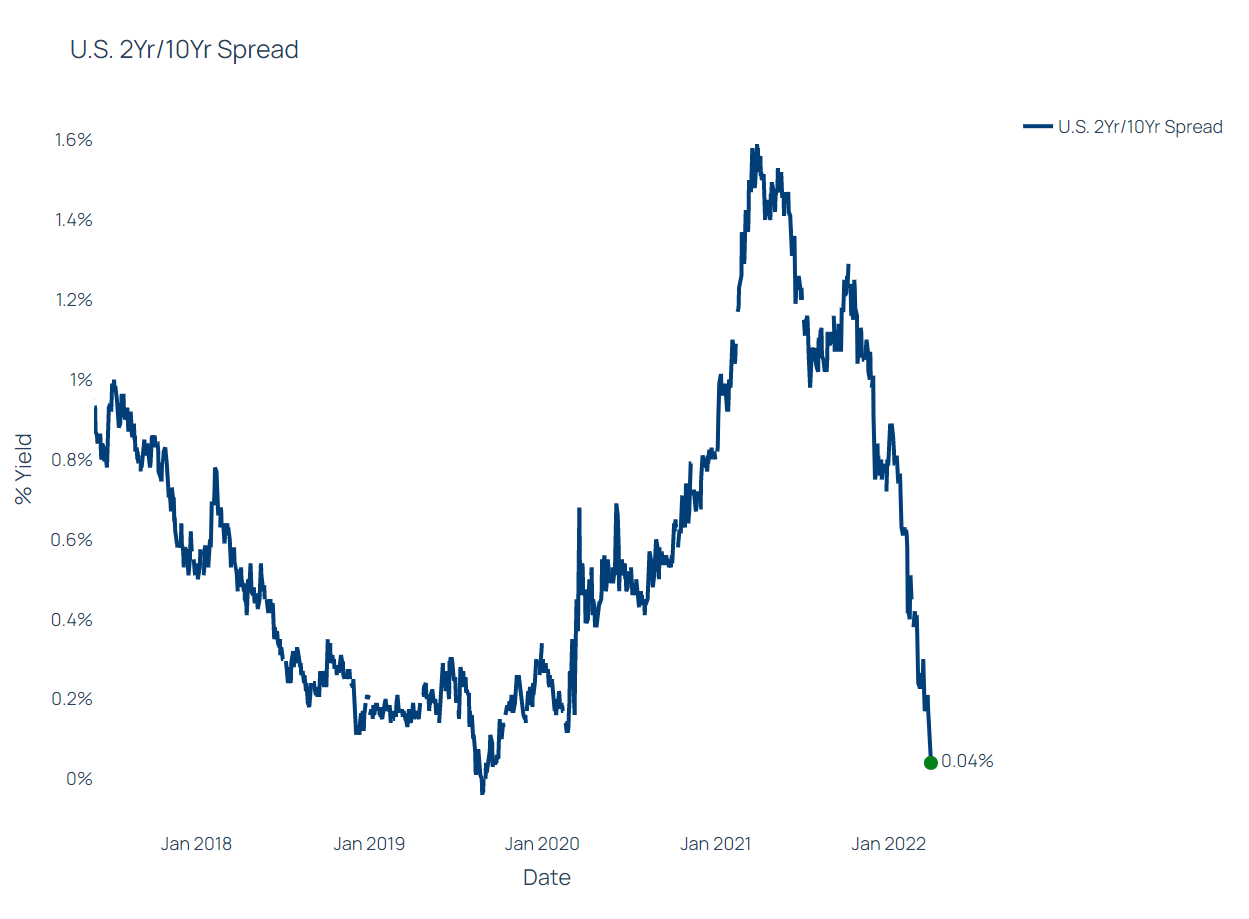 We entered 2022 with the Federal Reserve having recently announced that inflation wasn’t going to be “transitory” after all, though many market participants, including us, never thought it would be transitory in the first place (one of us is old enough to have lived through the government spending, oil shortages, and consequent inflation of the ‘70s).

Chairman Powell’s comments that “we know how to combat inflation” didn’t settle markets as the Fed failed to act in late 2021 and early 2022 (instead, the markets took a cue from the Show Me State where another one of us has roots). As the Fed raised rates in mid-March and announced intentions to raise rates 25 basis points at each meeting for the remainder of the year, the market became increasingly concerned over the Fed’s ability or willingness to keep pace. Interestingly, fears over the economic impact of the war in Ukraine fueled speculation that the Fed would need to be more cautious to avoid pushing the U.S. economy into recession.

Our view is that the continued and perhaps additional supply chain issues, commodity shortages, and elevated price of oil will fan the flames of inflation and necessitate the Fed becoming more, not less, assertive. This point of view was at least partially vindicated in late March as more Fed Governors stated they could support 50 basis point increases at multiple meetings if necessary. And as Russia, eventually, either moves on from its invasion or it becomes the accepted reality, the Fed focus will necessarily return to domestic issues.

With that rate backdrop we stayed cautious and held cash until early February before carefully entering the market. We also benefitted from high-yield bond spreads widening during the first two months of the year, providing a nice entry point for solar credit.

Performance for the first quarter was -0.40%. While never pleased with a negative return, this is strictly a function of our cautious deployment of capital in a rising rate market. By comparison the Bloomberg Aggregate, an index representative of the overall bond market, lost 6.33% for the quarter. As our portfolio is more fully deployed in both private assets as well as a few public bonds, we expect to enter the 6% to 8% yield range. Now because we mentioned performance of the fund, a quick word from compliance: Performance data quoted represents past performance; past performance does not guarantee future results. The investment return and principal value of an investment will fluctuate so that an investor’s shares, when redeemed, may be worth more or less than their original cost. Current performance of the fund may be lower or higher than the performance quoted. Performance data current to the most recent month end may be obtained by calling 844-4-FINITE or www.finite.io. 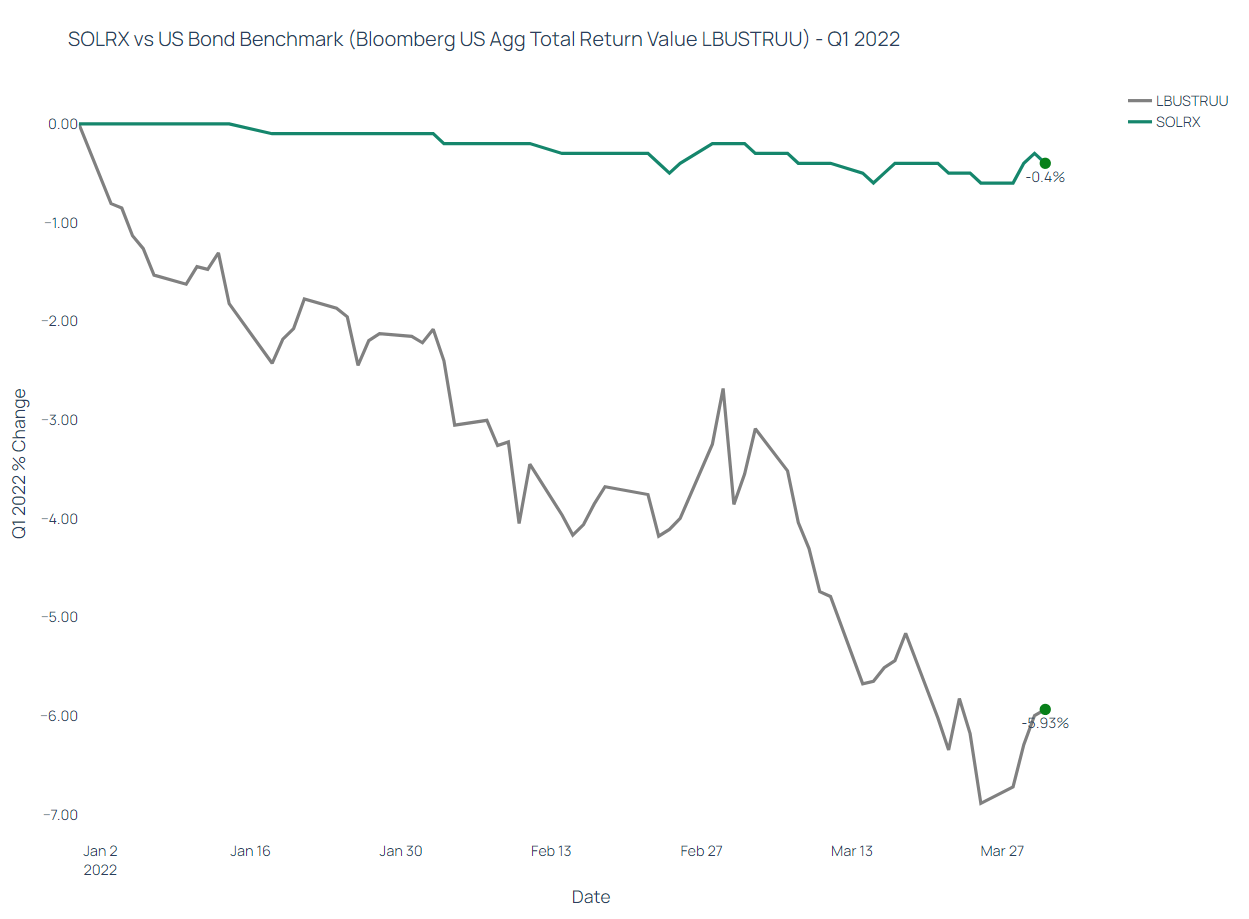 The volatile rate market led to interesting decisions last quarter. You’ve entrusted us with your capital and expect us to generate that 6% to 8% return over time; that sole focus would have led us to deploy capital as assets under management grew, to get the interest income rolling. Given our view on rates, however, we resisted that urge and were able to keep the NAV stable as opposed to losing real value as bond prices fell (as reflected in the Bloomberg Agg’s loss).

One of our first trades was the purchase of the 12-month Treasury bill, an effort to balance liquidity, duration**, and generate income. Shortly after we made the purchase, rates fell, confronting us with the decision whether to sell and realize the gain. This would have been consistent with our expectation of rising rates, but we’re portfolio managers, not portfolio traders; markets are dynamic and our rate view could have been challenged.

We might have realized a short-term gain by selling then rebuying as rates rose, but that isn’t our value proposition to you. We’re not making interest rate bets. We are committed to building a portfolio that attempts to deliver consistent long-term returns despite unexpected interest movements.

We have endeavored to maintain liquidity as we expect to add our first portfolio of private assets in mid-April. We also want to remain cautious with your capital as the Fed embarks on quantitative tightening to reduce the size of its balance sheet, which has exploded to over $9 trillion of assets, including $5.7 trillion of treasuries and $2.7 trillion of agency mortgage-backed securities.

The Fed will achieve this by allowing maturing bonds to run off (i.e. not reinvesting the proceeds), though the Fed has signaled there will be caps on month-to-month balance sheet contraction. Removing the Fed as the marginal bond buyer is likely to increase rate volatility as the market digests both the additional issuance and investors’ reactions to the muted demand. How much will rates need to rise for demand to meet supply? As such, our investments in private credit should be a safer space within your portfolios.

Lastly, every non-Treasury investment we’ve made is in solar. While our policy allows for 20% of the portfolio to be invested otherwise, we remain committed to meeting your trust in us to deliver our targeted return over time by investing in solar assets. 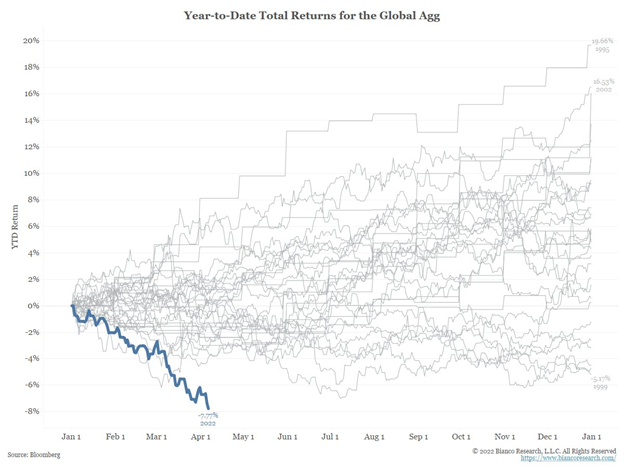 We look forward to Q2 and the opportunities that come with it. Thank you for your continued support.

​​The Fund is newly organized, and its Shares are not listed on any securities exchange and no market for the Shares exists or is expected to develop. In addition, the Fund’s investments in Solar Assets will primarily be investments in Solar Loans and other alternative lending-related securities, which have special risks as described in more detail with the Prospectus (linked above).

Although the Fund is not permitted to invest in loans that are of subprime quality at the time of investment, an investment in the Fund’s Shares should be considered speculative and involving a substantial degree of risk, including the risk of loss of investment. There can be no assurance that payments due on loans or other alternative lending-related securities in which the Fund will invest will be made.

If the borrower of the loan or other alternative lending-related security in which the Fund invests is unable to make its payments on a loan, the Fund may be greatly limited in its ability to recover any outstanding principal and interest due under such loan, as (among other reasons) the Fund may not have direct recourse against the borrower or may otherwise be limited in its ability to directly enforce its rights under the loan, whether through the borrower or the platform through which such loan was originated, the loan may be unsecured or undercollateralized, and/or it may be impracticable to commence a legal proceeding against the defaulting borrower.

Under the 1940 Act, the Fund may utilize leverage through the issuance of preferred stock in an amount up to 50% of its total assets and/or through borrowings and/or the issuance of notes or debt securities in an aggregate amount of up to 33 1/3% of its total assets which could magnify losses as well as gains. There can be no assurance that any leveraging strategy the Fund employs will be successful during any period in which it is employed.

*The estimated gross expense ratio is 2.51%. Expense ratios are annualized and calculated as a percentage of estimated average total assets.

**Duration is a measure of the sensitivity of the price of a bond or other debt instrument to a change in interest rates.